The primary aim for the establishment of the Department of Anatomical Pathology was to train pathologists in the Taipei City government hospitals. Since that time, 8 pathologists have been trained and licensed and are currently working in various well-known hospitals, thus fulfilling our initial objective. Our current focus is on providing quality diagnostic services for small-to-medium sized hospitals and clinics. In recent years, the institute has also set up and developed the Molecular Pathology Diagnosis Lab, earning it a national recognition as a “Benchmark Laboratory,” for its advanced diagnostic methods and comprehensive clinical services. The Department of Anatomical Pathology is currently one of Taiwan’s biggest Pap smear screening centers. The members of this strong work force currently include 6 pathologists, 12 cytotechnologists, 8 medical technologists, 2 laboratory technicians, 6 clerical staff, and 1 specimen collection staff members.


The main functions are as follows 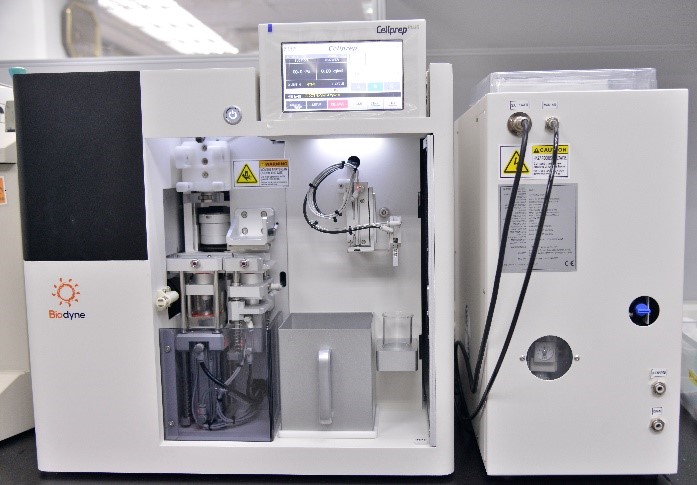 
(2) Liquid Thin Prep Cytology This procedure is different from the traditional Pap smear in which the collected cervical brushings specimen is placed into a vial containing a special preservative, instead of being directly smeared on top of a slide. The sample is then made into a thin smear by an automated smear- making instrument.


(4) Human Papilloma virus Screening After 50 years of relentless research, it has been confirmed that cervical cancer is definitely linked to the Human Papilloma virus (HPV) infection. The HPV genome is a double-stranded DNA with more than 100 genotypes of which 30~40 are sexually transmitted. Thirteen of them, namely Types 16, 18, 31, 33, 35, 39, 45, 51, 52, 56, 58, 59, and 68 are considered “high risk” types related to cancer. HPV screening allows early detection and early treatment if necessary.


(2) HER2/neu gene amplification for breast cancer detection The HER2 Dual ISH DNA Probe Cocktail was designed to quantitatively detect amplification by microscopy; the HER2 gene, via two colour chromogenic in situ hybridization(ISH) in formalin-fixed, paraffin-embedded human breasts; and gastric cancer, including the gastroesophageal junction. Following staining on automated slide strainers, the result can be used as an aid in the assessment of patients for whom Herceptin (trastuzumab) treatment is being considered.

(3) PD-L1 PD-L1 is an immune-related biomarker that can express in the tumor cells. The patients’ eligibility for anti-cancer immunotherapy highly relates to the expression of the PD-L1 protein in the tumor. The primary detection method for the PD-L1 protein in non-small cell lung cancer (NSCLC) is immunohistochemical stains. With the automatic immunohistochemical staining system, a variety of PD-L1 antibody clones produced by different manufacturers could be applied on the formalin-fixed and paraffin-embedded tissue specimen. The staining results aid the clinicians in the decision on whether or which anti-cancer immunotherapy they should prescribe for the patient.

(4) Mismatch repair gene (MMR gene) for colorectal cancer detection Hereditary nonpolyposis colorectal cancer (HNPCC) is one of the most common diseases of hereditary colorectal cancer, accounting for about 2-5% of all colorectal cancers. It is caused by the mutation of mismatch repair gene (MMR gene). These gene products are mainly related to gene repair in cells, including: MLH1, MSH2, MSH6, and PMS2. These four gene mutations that induces HNPCC production is confirmed. Therefore, IHC is used to detect the protein expression of MMR gene in cancer tissue. If there is no expression, it means that the relative gene has mutated and loses its function. intraepithelial lesion), or in patients with positive high-risk HPV test results.

Our Depar tment al so provide s par af f in making and embedding tissue services to various universities and research labs, not only for diagnostic purposes, but also with the goal of supporting the mission to help these institutions improve the quality of their biopsy interpretation skills. Our services includes generating human and animal tissue biopsies, hematox ylin- eosin (HE) staining, immunohistochemical staining, frozen tissue biopsies, and various special stains such as Masson- trichrome and PAS, etc.